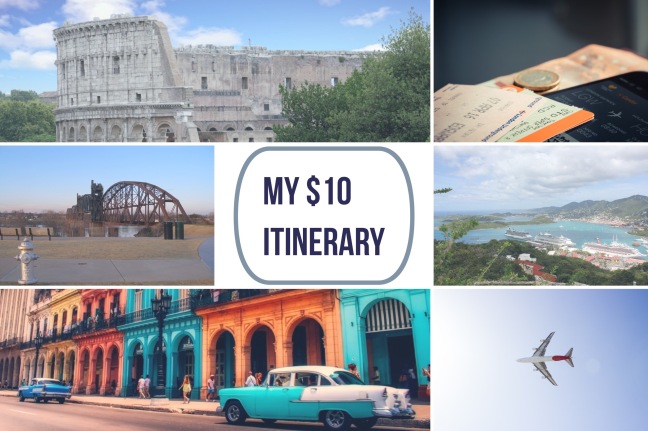 Miami to Havana, Cuba – $10
The above list is where I’ll be traveling to in the next 10 months and how much it cost me for the plane tickets.

On October 12th I booked all of these flights. It was like Christmas morning for me to be able to book tickets to different parts of the world. It was even more like Christmas due to the fact that I didn’t not really have to pay for these tickets! Merry October Christmas to me and my wife!
Let’s get down to the nitty gritty of how this was possible.
In May, 2016 I was sent to South Korea for work as an ESL teacher. During my layover in Detroit, Delta airlines announced that they were overbooked. They had chosen me to be left behind. This would add 11 hours to my trip total, but as a consultation, Delta gave me $1000 in Delta dollars, which could be used to pay for tickets on another trip. Yay! I was happy to trade my time in an airport for a free trip in the future and they even threw in free meals for the time I’d be waiting in the airport as a bonus.
Fast forward to October 2016. I had flown to Mexico earlier in the summer to visit former students and give a presentation at a university with some of the Delta dollars, but I still had $650 left. My wife and I decided to use the Delta dollars to fly to Alaska, the 49th US state for us to visit. (We are only missing Hawaii now.) we had a great 10 day trip there, but when we got to the airport to return to the lower 48 there was an announcement made. Delta needed volunteers to stay behind, because they had again overbooked the flight. My wife and I had allowed for wiggle room in our travel dates that allowed us to be able to stay longer, though our luggage would go on without us, we both volunteered. Delta gave each of us $1000 in Delta dollars. Jackpot! Plus, they gave us a room at a 5 star hotel for the night. So we got an extra day in Alaska and money for a future trip. We were happy. That extra day happened to allow us to see beluga whales for the first time, so it was a big win. The next day we got ready at 3am, again, to board our 5:30am flight. After getting through security and arriving at our gate, guess what, an announcement was made that Delta needed volunteers to stay behind. They had overbooked, again. We volunteered, again. Though Delta would only give each of us $800 in Delta dollars and we were now on day 2 of wearing the same clothes, we were happy. We now had a total of $3,600 Delta dollars to spend over the next year! Unfortunately we couldn’t volunteer for anymore days in Alaska, but we felt like we had won a mini-lottery.
Delta dollars have a life of 365 days. If you don’t spend them within a year, they go away. In the year since we were given the Delta dollars, my wife and I had used $600 to fly to Mexico for a nice spring break trip in Acapulco, Mexico City, and Cuernavaca. That was all we had time for. It quickly became October and our $3,000 of remaking Delta dollars were going to expire. My wife and I decided to make future plans on where to go and we decided Italy in May was going to be our main trip. After those tickets, we still had $1,400 left. I needed to go to Arkansas for a job that my company was hired for, so I booked that flight. That left us with $1,000. We booked flights to Havana, where we will do some ESL teaching and observing. We still had a few hundred left after that, so I booked a flight for myself to the Virgin Islands, since it’s not a place on my wife’s list of places she wishes to visit, I was allowed to buy a ticket to go alone.
There are a few things I learned about Delta dollars that I wish to pass along.
1. Though Delta dollars expire after a year, you can use them to book flights that are past that 1-year date. So the trips don’t have to be completed before the 1-year is up.

2. Delta dollars come in vouchers. We each had $1000 and $800 vouchers. When buying tickets, you cannot combine the vouchers. Meaning that I couldn’t pay for a $1200 ticket using two different vouchers. I would have to pay the difference in real money. So I could use $1000 voucher and $200 cash to buy a $1200 ticket. This is why I had to pay $10 for the Cuba tickets. I had a voucher that was $10 too short for the cost of the ticket and I couldn’t use my other vouchers to cover it.

3. You can buy tickets for other people with your Delta dollars, as long as you are on the itinerary with them. I cannot transfer the vouchers, but I could have someone travel with me.
Tips:
1. Leave wiggle room in your travel dates. Don’t be stuck to specific days.

3. When traveling, pay attention to when an airline is making announcements. There may be an opportunity to collect compensation that can be used for a future trip.

4. Hold out – don’t accept only $100-500. After the infamous United Airlines incident where a passenger was bloodied after being pulled off of an overbooked plane, Delta has raised its compensation amount up to $10,000. That’s a lot of traveling potential.

5. Book flights that seem to be almost full. This will allow you to have the potential for being in an overbooked flight.

6. Enjoy life, smile, and be nice to others. Good things will happen to you when you do these things.