I was on a cross-country trip (which I will write about soon) and was cutting from Montana across to California. I imagined Washington as a mountain filled state with a lot to see and Oregon as just a state to get across to the coast. BOY WAS I WRONG!

No long after crossing into Oregon, I began driving on Interstate 84 towards Portland. It did not take long until I was totally amazed!

We came around a curve and I saw the Columbia River and rolling hills on each of it’s sides. The river separated Washington and Oregon. Pretty quickly I was in the Columbia Gorge. (Though I did not know the name at the time, I had to Google it to see where I was.)

Entering into the Columbia Gorge felt like a journey into Middle Earth. There were mountains with snow-covered peeks on each side of a mammoth river. There were waterfalls coming down on each side of the road. There were animals climbing the sides of the hills, and there were bald eagles perched in the trees lining the road. It was such a fantastical place.

After beginning to take in all of the wonder of that stretch of interstate, my thoughts went to, “Why have I NEVER heard of this place?” (I think I may have asked my wife this about 5 times.)

The Columbia Gorge will now be a future vacation destination. I want to go and really explore the ins and outs of area when I have sufficient time to really take it all in. There seemed to be so many things to see and do that I want to really spend time and take it all in. 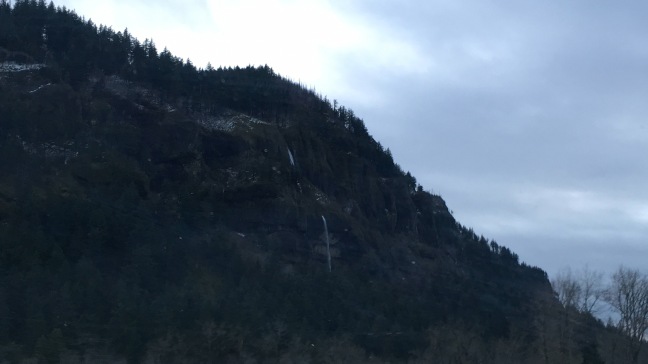 Really though, HOW DID I NOT KNOW ABOUT THIS PLACE!

Here is a video I put together with some of the stretch of Interstate.